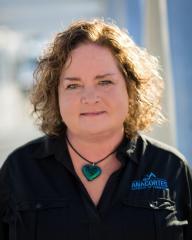 A 1987 graduate of the Edward R. Murrow School of Communications at Washington State University, Stephanie Hamilton has built her career with an emphasis on assisting small businesses.  Starting with the International Marketing Program for Agricultural Commodities and Trade, Stephanie worked with farmers in Washington State to better serve the needs of international clientele.

Following a short stint at the California Bankers Association in San Francisco, Stephanie worked for five years for Towers Perrin, and international benefits consulting firm.  However, the non-profit bug had bitten and after pestering Don Wick to hire her as the marketing director at EDASC – she knew she was home again!  Working for EDASC gave Stephanie the true understanding of the importance of jobs to a community and why true economic development is so vital. Stephanie helped to launch the Skagit Business Monthly Magazine, then took time off to work from home in her own marketing/PR firm.  In 2005, she became the events coordinator at the Anacortes Chamber of Commerce and in 2011 she was named the President.

While working in Seattle, Stephanie visited Anacortes on a sailing trip 26 years ago and one night proclaimed to her boat mates that this would be her home and she would direct the chamber of commerce!  She is the current President of the Washington Chamber of Commerce Executives and the President of the Anacortes Rotary club.  Stephanie is a 2012 graduate of Leadership Skagit. She is married to Jack Hamilton (local musician and director for Alpha Home Health) and has two sons, Caleb (22) and Geoffrey (17).